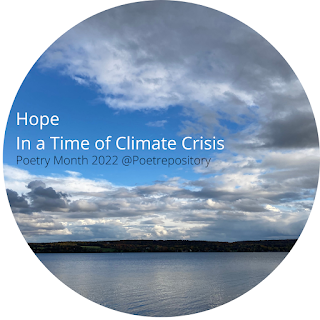 contrails are pollution.
I’m sorry to be the one to break it to you
but a sky crisscrossed by blazing pink lines
lit by the rising sun
on a cold, late-winter morning
is not a sky full of kisses
is not a glorious gift
is not a positive sign from the Universe.
Contrails cause cloudiness
that contributes to climate change.
They are categorized as “homogenitus” –
clouds resulting directly from human activity.
This is just to say,
no matter how delicious or beautiful,
they’ve got to go.
Forgive me for saying so.


© Mary Lee Hahn, 2022
Contrails don't give me hope in a time of climate crisis. They play a significant role in aviation-related global warming by creating clouds that trap heat on earth. But the fact that scientists are studying them does give me hope. The sudden, dramatic drop in airplane traffic in 2020 proved to researchers at MIT that their mapping of contrails was accurate.
Researchers at the Yale School of the Environment remind us that the ONLY way to shut down global warming is to curb CO2 emissions.

"But if the world wants a big short-term contribution from aircraft to keep us below some specific temperature target, such as 1.5 degrees C, then action on contrails can provide it."

Researchers at MIT are

"working with major airlines to forecast regions in the atmosphere where contrails may form, and to reroute planes around these regions to minimize contrail production.

Steven Barrett, professor and associate head of MIT’s Department of Aeronautics and Astronautics. "There’s an unusual opportunity to halve aviation’s climate impact by eliminating most of the contrails produced today."

"Most measures to make aviation sustainable take a long time," Barrett says. "(Contrail avoidance) could be accomplished in a few years, because it requires small changes to how aircraft are flown, with existing airplanes and observational technology. It’s a near-term way of reducing aviation’s warming by about half." "

(This poem was written using The Thing Is by Ellen Bass as a mentor text.)